During an extensive real-life test the Mobistel Cynus F3 was able to prove, that even a bargain can deliver great performance. It’s a dual-core smart-phone for less than 130 EUR which only shows few weaknesses and impresses with a very fluid user interface. I’ll tell you all the details in this video:

For a low-end product the Mobistel Cynus F3 is doing a lot of things perfectly right: The display shows a decent resolution of 480×800 for it’s 4-inch dimensions, and besides the limited viewing angles (especially looking from above) it’s of good quality. WIFI, GPS and mobile internet work flawlessly – the „bigger brothers“ T1 & T2 had some significant issues here. The almost up-to date Android 4.1.1 was only modified where it makes sense (leaving the new icons aside…): Quick toggles in the notification bar, audio profiles and dual-SIM handling all come very handy. But most importantly, the phone works like a charm, with a very fluid interface and no real issues. Even quite demanding games like Real Racing 3 run quite nicely. Of course you can also use it as a telephone and the audio-quality when calling isn’t bad either. 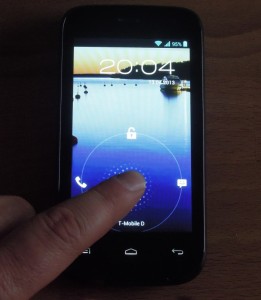 But logically there are also downsides with a phone of such an affordable price: Besides the limited viewing angles of the display, which makes looking at the screen with several people an unpleasant experience for some, this mainly hits the camera: Pictures show a lot noise and grainy texture when even only mildly zooming in, focussed macro-shots a impossible and touch-to-focus does not work (so I doubt it really has an auto-focus as the specs claim), videos are recorded at a maximum of 1280×720 and stutter horribly when panning (see video below) and the LED-flash light leaves yellow stains. Well, at least pictures taken under good light conditions look decent – until you start zooming in. Print-outs of about post-cards size should be still ok, but not much more.

Besides that, there are only minor points to be criticised: The keys are only lit after using them and the lock-screen does not stick to well established conventions – these are details you can get used to rather quickly. And the glossy back with it’s quite cool glimmer-effect  is not for everyone’s taste, but bearable.

All in all, these deficiencies are acceptable given the low price.

A more serious point is battery life: While I normally got through the day without any problems, although using and testing the phone quite intensively, I had a few occasions where the battery lost almost 20% of it’s charge during few hours in standby mode. I am not yet sure what was causing this and if there are ways to avoid it – right now I’m suspecting Google Now, which is now deactivated for 2 days – I’ll monitor if standby stamina will be more stable now and update this article accordingly.

For less than 130 EUR the Mobistel Cynus F3 delivers an astonishing complete package and only shows bearable deficiencies. If you don’t need an excellent camera and don’t plan to look a lot at the screen with a whole group of people, and if you prefer an affordable price over a shiny brand-name, this phone is definitely a recommendable one for you. If you need more than that, you’ll have to spend significantly more.